Cimelia Metropolitana. The History and Treasures of the Zagreb Archdeocese Library 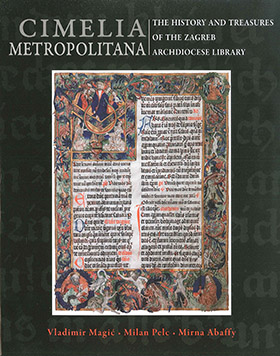 Publishing series and numberž
Studies and monographs of the Institute of Art History, book 47

With this monograph, the Metropolitan Library, today housed in the Croatian State Archives, is splendidly presented to Croatian and international cultural audience as Croatia's first-class cultural monument. In the first chapter, Library’s long-time director Rev. Vladimir Magić portrays the history of the Library and the diversity of its collections. In the second chapter, Milan Pelc opens Metropolitana’s book treasures: selected manuscripts, incunabula, books printed between the 16th and the 19th century and books from the croatica collection – especially important for Croatian cultural and historical identity. Special attention was given to their valuable visual elements – illuminations, illustrations and decorations of individual books. In the third chapter, Mirna Abaffy gives an insight into Valvasor’s Collection of Prints and Drawings of the Zagreb Archdiocese through selected items preserved in the collection. The present monograph provides the reader in word and image with historical knowledge and visual evidence about the Metropolitan Library and its holdings.

5
The Metropolitan Library over the Centuries

29
Books from the Jesuit College in the Metropolitan Library

31
Books and Manuscripts from the 18th to the 20th Century

37
The Library of Bishop Đuro Kokša

116
Books Printed Between The 16th And The 19th Century

209
Valvasor's Collection of Prints and Drawings of the Zagreb Archdiocese

233
The Cultural Value of Valvasor's Collection of Prints and Drawings