The Cathedral of the Assumption of the Virgin in Dubrovnik 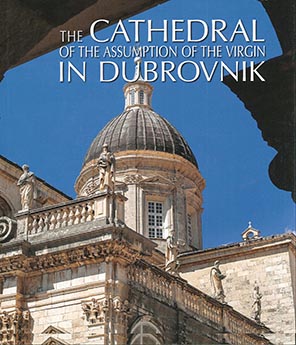 Publishing series and number
Studies and Monographs of the Institute of Art History, book 46

-
The Cathedral of the Assumption of the Virgin in Dubrovnik (1671 – 1713) occupies a prominent place among Croatian cathedral buildings. Emerging during the reconstruction of the city after the earthquake in 1667, the monumental three-aisled Baroque basilica with a dome uniquely combined not only the high aesthetic standards of the Dubrovnik commissioners and the Roman architect, but also the individual leaders of construction from Rome, Sicily and Dubrovnik. The interior furnishings are equally as important and exquisite – marble altars ordered in Naples, Carrara and Genoa, numerous paintings by Italian and Flemish painters as well as painters from Dubrovnik – and the special phenomenon that is the Reliquary of the cathedral with almost two hundred relics, gathered from the 10th to the 21st century. The Baroque cathedral was preceded by two older buildings – one dating from Late Antiquity / Byzantium and the other Romanesque – the archaeological remains of these churches, including frescoes and fragments of sculpture, testify to the high level of quality in the artworks of the disappeared buildings. Inspired by the high quality of the architecture and artworks, and prompted by the commission of the City Parish the Institute of Art History began to draft the monograph with experts in their respective fields. The tricentennial of the completion of the cathedral offered a strong additional motive. In addition to contemporary knowledge, the monograph includes new scientific facts based on field and archive research in Dubrovnik and comparative research in Italy. The high value of the Dubrovnik cathedral in the European context called for editions in both Croatian and English.