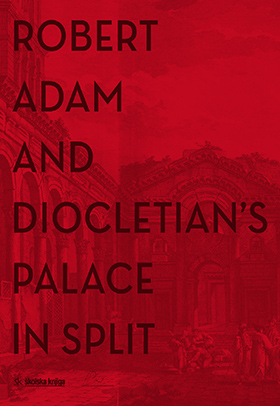 ​* The book can be purchased at Školska knjiga.

-
When, on his Grand Tour, the Scottish architect Robert Adam travelled from Rome to Split in 1757 to study Diocletian’s Palace, he expected to find a monumental Roman villa. Instead, he came across an exceptional late antique structure that, in the Middle Ages, had been transformed into a city. Adam turned his study of this monument into an original architectural theory, and, in London in 1764, it was published in one of the most beautiful books of the eighteenth century: Ruins of the Palace of the Emperor Diocletian at Spalatro in Dalmatia.

The lessons Robert Adam grasped in Split also inspired his own architectural projects in England and Scotland influencing in part the „Adam Style“, a specific neoclassical style that had a significant impact on European and American architecture. We find the imprint of Diocletian's Palace as ana architectural and urban design model everywhere in Adam's projects, from the scale of the ornamentation (a famous example is his interpretation of the capital from Diocletian's Peristyle) to the application of the specificities of its spatial constructution.

In 2014, a group of scholars gathered in Split to mark the 250th anniversary of the publication of Adam's book, and a series of essays developed out of their discussions. Their texts are illustrated with more than two hundered images, some of which are being published for the first time, from numerous archives and museums, from Sir John Soane's Museum in London to the State Hermitage Museum in Saint Petersburg.

This book shows that the ancient stratum of Diocletian's Palace, this extraordinary multi-layered urban fabris, has not changed notably since Adam's visit to Split. Yet the boo kis more than just the story of Adam and Diocletian's Palace; it is also a guide to the Palace's spaces and monuments, and a witness to its changes and its continuity. All of these we would not have been able to understand, nor experience so well, without Adam's tireless research.

111
Iain Gordon Brown
“A Glisk of Infinite Merit”:
Split and Spalatro in the Biography and Evaluation of Robert Adam

193
Ana Šverko
“The Views from the Palace Are No Less Beautiful”: The Context of Diocletian’s Palace in Adam’s Spalatro

309
Krasanka Majer Jurišić
Adam’s Print of the Western Gate of Diocletian’s Palace: A Resource for the Study of Communal Buildings in Split in the Eighteenth Century

325
Ivan Mirnik, Ante Rendić-Miočević
Another Look at the Livorno Edition of Adam’s Book on Diocletian’s Palace

DIOCLETIAN'S PALACE AND THE ADAM STYLE

357
John A. Pinto
“The Beautiful Spirit of Antiquity”: Robert Adam and Diocletian’s Palace

379
Frances Sands
Reconstructed and in Ruins:
The Influence of Diocletian’s Palace Within the Drawings of Robert Adam

-
This book has been supported by the funds of the Croatian Science Foundation under the project Grand Tour Dalmatia (7091), the Ministry of Science and Education of the Republic of Croatia, the Croatian Academy of Sciences and Arts, and the City of Split.