The Collegiate Church of St Blaise in Dubrovnik 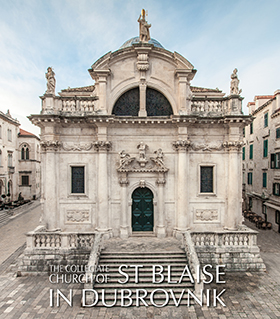 Publishing series and number
Studies and monographs of the Institute of Art History, book 53

-
"By telling the history of the Collegiate church of St Blaise in Dubrovnik, from its foundation up to the end of the final restauration in 2016, this monograph tells in a sense the complete history of a city, that is, one of the most important harbours in the Adriatic coast. When you read this book, you can truly see flowing the history of the city, because St Blaise, after becoming its patron, identifies Dubrovnik and all the history of the city passed in the church dedicated to him. As told in the introduction by Mate Uzinić, the Bishop of Dubrovnik, this volume “brings before the public for the first time, in a clear way, the results of scholarly research into the history of the construction, furnishing and renovation, architecture and artworks, and the historical and artistic context of the present Baroque building and the late-medieval church that preceded it on the same site”. In effect, as told by the editor of the book Katarina Horvat-Levaj in her “The Historical Interpretation of the Church of St Blaise”, a group of specialized scholars finally deal with the problem to reconstruct the history of an important church, on which we had (before now) only important, but individual and disconnected searches, published since the 1950s in many different occasions. Thanks to this book the breast of a Dalmatian city, with all its Adriatic and Mediterranean connections (from Venice to Ancona, from Milan to Puglia, from Naples to Genoa), clearly emerges." (Assistant Professor Giuseppe Capriotti)

-
"The church of St Blaise is a distinct symbol of Dubrovnik, and also one of the most important architectural monuments on Croatian territory. It is dedicated to the patron saint of Dubrovnik and in an ideal way covers the millennial continuity of the saint’s protection. On the other hand, the construction of the current church showed the resolute approach to the restoration of Dubrovnik after the catastrophic earthquake in 1667, and confirmed the strength of this cultural milieu to maintain a high level of creativity. The invited, renowned, Venetian architect and sculptor Marino Groppelli fashioned in 1706–1715 an impressive Baroque edifice, one of the most conspicuous points in the urban tissue, and a work that harmoniously connects spatial and sculptural values. The monograph on this most important monument was made by a team that had recently proved itself on the interpretation of the Dubrovnik cathedral, about which it published a comprehensive and systematic book." (Academician Tonko Maroević)


"The study of the architectural structure and artwork was supplemented by an in-depth archival appraisal of numerous hitherto unknown documents in Croatian and foreign archives. The church itself and its works of art were evaluated in the broader European (Mediterranean) context by comparing them with related monuments in Italy, and especially in Venice and Friuli, where Marino Groppelli, the chief architect and sculptor of the church, came from and worked. This methodologically suitable approach is also reflected in the structure of the monograph – its chronologically arranged, interpretative chapters by the authors, supplemented with a catalogue of the works of art, transcriptions of the most important documents, a list of sources and literature, and finally an index of persons, sites and monuments." (Academician Vladimir Marković)

-
The book was published by the support of the Ministry of Science and Education of the Republic of Croatia, City of Dubrovnik, and Society of Friends of Dubrovnik antiques.